There are bad days on bicycles. Bad days like when the wind is in your face, the sun is just too hot, or you bonk real hard. And then there are really bad days on bicycles. Those are the days where you leave for your bike ride and have no idea that by the time you return, your world will look completely different than it did when you put on your jersey, pumped up your tires and rolled out of the driveway.

I had one of those days on August 16, 2015. My boyfriend, Wade Franck, and I were scheduled to compete in the Urban Assault Ride – a bicycle scavenger hunt – that day. He picked me up at my house, loaded my bike on his car, and we joined many friends and acquaintances at the starting line in Downtown Des Moines. Here we are at the start of the race:

We raced through the course, completing obstacles and having a great morning together. It was a really good day – right up until it wasn’t. About half way into the race, we were safely riding in a large group of cyclists. A vehicle came up behind us – really fast and really recklessly. I felt the passenger side mirror of the vehicle whiz by me and by the time I thought to yell a warning to Wade, he had already been hit. He flew through the air about thirty feet and landed on the ground like a rag doll. For 52 hours, he lingered in the Critical Care Unit at the Iowa Methodist Medical Center. He died two days after a drunk driver struck him, and only five days after he turned 41.

As August 13, 2016, the day that Wade would have turned 42, approaches, several of his friends and I have banded together to organize the Wade Franck Memorial Bicycle Ride and Raffle. It promises to be an emotional day on the Central Iowa Trails. We are hosting a convergence ride at the 13-story tall High Trestle Trail Bridge, in memory of Wade.  Check out the first #RideForWade, held at the bridge only eight days after he died.

To celebrate Wade’s everlasting light in the cycling world, the Wade Franck Memorial Bicycle Ride and Raffle will raise funds for the Iowa Natural Heritage Foundation. The funds will be used to connect the High Trestle Trail and the Raccoon River Valley Trail. Both are nationally renowned trails – for their length and features – and they are only nine miles apart!

Currently, to ride between the two trails, a cyclist must traverse a gravel road, a federal highway and a county highway. Cars on the federal highway speed by at or above the 55 mph speed limit, with not much space between them and cyclists, as seen here: 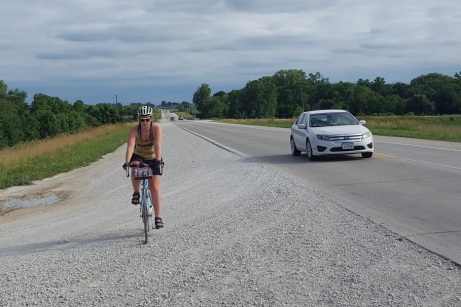 Connecting these trails was a cause that Wade supported. We celebrated his 40th Birthday with a bicycle tour on both trails – and that tour would have been much easier if the trails were connected. Closing the nine mile gap between the two trails will create a the longest paved trail bicycle loop in the nation – and even better access to the phenomenal High Trestle Bridge!

The grand prize in the Wade Franck Memorial Bicycle Ride and Raffle is a custom Specialized AWOL adventure bike, complete with Zipp wheels and SRAM components. The bike, valued at approximately $3700.00, will be custom fit by the experts at Kyle’s Bikes in Ankeny, Iowa. There are also several additional raffle prizes, valued at least $100.00 each. Raffle tickets can be purchased online and you need not be present to win!

In addition to the bike raffle, Moxie Cycling has generously partnered to donate a portion of their RAGBRAI sales to the Wade Franck Memorial Fund.

This is especially meaningful to me because I’m serving as a 2016 Moxie Ambassador. I got my start wearing Moxie from Wade, when he worked as Sales Manager at Kyle’s Bikes. He brought Moxie in to the shop because it was important to me to look stylish while biking! With the Revolution Collection, you can be sure to look stylish while pedaling any distance – from around the block to across the state!

Thank you Moxie Cycling! I’ll see y’all between Glenwood and Shenandoah on Sunday, July 24, looking stylish in a Revolution Peplum! 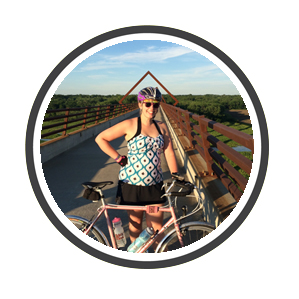 Jess Rundlett is a Moxie Cycling Ambassador and blog contributor. Check out her bio here!